I love gin. And I also love writing about gin. It’s not just about the spirit for me though. Yes, of course, I love interesting botanicals and a delicious drink. But I also look for a good story, and a stunning bottle. And, according to The Gin Guild, I’m not alone. Truth be told, it’s pretty rare to find a gin that really ticks all the boxes. Rarer still to be asked to review one. Ladies and gentlemen, Trevethan Cornish Gin is, for me, that gin.

It was Little Gin Box that first introduced me to Trevethan Gin and I was pretty impressed. So I sought out the makers at The Spirit Show, had a taste and a chat, and was very kindly offered a bottle of gin to review (they were clearly in no doubt about how much I already liked it!). When it came to tasting it I, unprecedentedly, had not one, not two but three gin and tonics, each with a different garnish. I couldn’t get enough! And so Trevethan Gin soared into my top 10 gins of 2016.

First impressions really do count and this doesn’t disappoint. The bold and weighty bottle really stands out on the shelf and is set off by the stunning label designed by Emma Tickney of Made by Fallow.  The label honours the gin’s heritage, featuring the Griffin Roundel, developed from the Trevethan family’s Coat of Arms, and an hexagonal Art Deco design reflecting the 1920s period in which the gin originated. The colour theme also brings to mind the blue and gold of the Cornish sea and sand, and serves to catch the light beautifully. 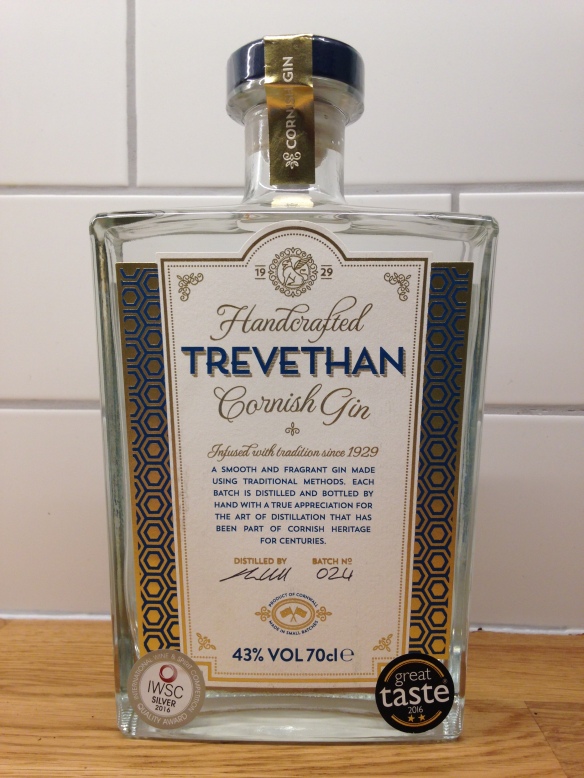 The bottle sets the bar pretty high but the contents exceed all expectations. Trevethan Gin is made using botanicals sourced from all over the world, including coriander, cassia bark, angelica, cardamom, orange peel, lemon peel and vanilla, as well as Cornish elderflower and gorse flower, handpicked from the hedgerows of Trewonnard Dairy Farm in Treneglos. It is traditionally produced using the one-shot method, with no blending taking place after distillation. Only water, which comes from a natural spring on nearby farmland, is added when the spirit is cut down. The soft spring water, which requires no mineral treatment, is credited with helping Trevethan Gin achieve its “truly natural flavour”.

On the nose, Trevethan Gin features piney juniper alongside sweet and floral notes of vanilla and elderflower. A clean and well-balanced gin, this is undoubtedly good enough to drink neat, with perhaps a small garnish. With spicy cardamom notes mid-palate but a sweeter, more floral and gentle finish, this is also a complex gin. The spices keep the flavours grounded and somehow it never gets too sweet but always remains distinctively aromatic.

What really blew me away, though, was the tactile sensation the gin gave on the palate, or “mouthfeel”, as it is otherwise known. This isn’t something I’ve written about before, partly because it is not such a prominent feature of all gins, but I was really struck by it this time! Trevethan Gin slides round the mouth with a subtle oiliness that gives it a really soft, smooth nature. The best way to understand what I’m on about is to try it for yourself but, take it from me, it feels fantastic!

I tried Trevethan in a G&T (or three) and also took their advice to not add ice. I know! But listen… Trevethan suggest that, even if you use plenty of ice to prevent it melting and diluting the gin, the ice can still draw out the botanical oils and disturb the flavour profile. Instead, they recommend that you place your glass in the freezer before making your G&T and add the cold tonic first, then the garnish and lastly stir in the gin. I tried it and I have to say I could tell the difference. It isn’t a huge difference, but the G&T made in that way was a little more complex and the mouthfeel was a touch more prominent. If only I had a bigger freezer, I may well be a convert! 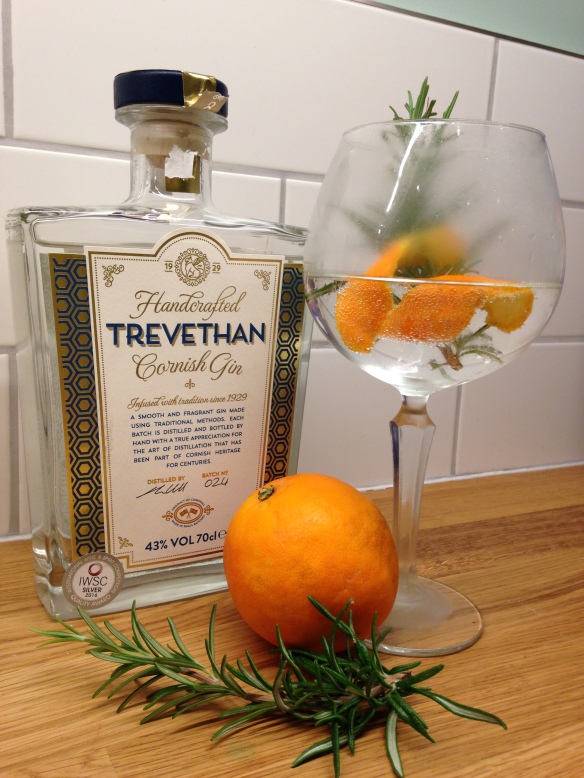 Trevethan recommend a few different combinations of tonics and garnishes and I tried it with both Fever-Tree Elderflower tonic and BTW tonic – which both compliment the gin wonderfully. For the garnishes, I used orange and rosemary, apple and clove, and orange and ginger. The orange and rosemary with elderflower tonic was probably my favourite combination, as it really brought out the citrus oils and sweetness. On the other hand, the apple and clover garnish with BTW tonic accentuated the spicy notes, in particular the cinnamon-like flavours of the cassia bark, and resulted in a slightly cleaner finish. Frankly they were all bloody delicious though! 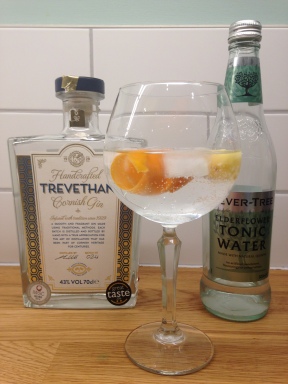 Backing all that up is a great story combining some of the most popular themes of the gin renaissance: revived recipes, family traditions, local botanicals and a bit of good, honest hard work!

When Rob Cuffe, an engineer, and John Hall, a chemist, decided to make a gin they weren’t looking to the future but to the past and Rob’s Cornish heritage. Most traditional Cornish families used to have their own recipes for the county’s favourite food and drinks, and Rob’s ancestors, the Trevethan family, were no exception. But it was when Norman Trevethan was exposed to London’s love affair with gin cocktails, working as a high-society chauffeur during the Roaring Twenties, that he was inspired to perfect the family gin recipe.

The recipe became the stuff of family legend, but no-one had ever written it down, so when Norman’s grandson, Rob, decided to resurrect it 70 years later, it was no easy feat. It was left to Rob’s mum, the last living person to have tasted the gin, to help the pair recreate the flavours that had originally been inspired by the Cornish hedgerows. Even when they settled on a dry gin featuring local elderflower and gorse flower, the challenge remained to scale the recipe up to production levels. They’d achieved their coveted mouthfeel with gorse flowers alone in the small batches, but this was lost in the bigger batches, so they added vanilla to the mix. And finally, after two years of experimentation, hard work and perseverance, the Trevethan family gin was re-born in October 2015 to be enjoyed and shared as Norman originally intended.

“We hope that when anyone opens a bottle of Trevethan Gin they remember the reason it was created by Norman Trevethan in the first place… it was created to be shared… shared with friends, family and whoever cared to join them.”

Rob and John may have set out with admirably modest ambitions, but having already been awarded one Great Taste award and two International Wine & Spirits Competition silver medals, I suspect they can afford to set their sights a little higher. Frankly, with a gin this good, I’d be going for world domination! 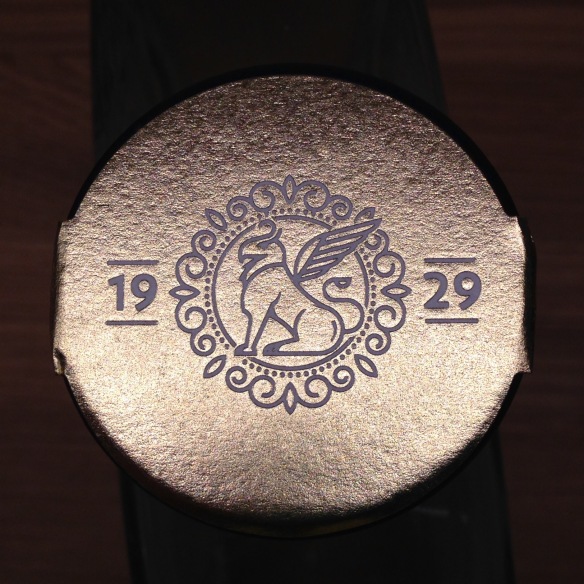 Trevethan Cornish Gin can be purchased from The Gin Box Shop for £37.95 for 70cl. And, if you do pick up a bottle, make sure you look out for a griffin on the cork to win a free bottle of Trevethan Gin and a £10 donation to the charity of your choice!

With thanks to Trevethan Cornish Gin for the sample bottle.