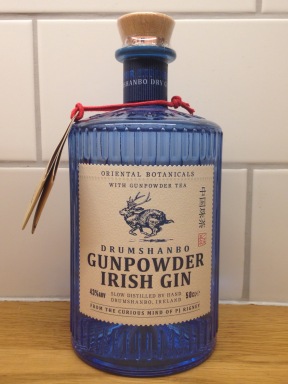 Another year has flown by and what a year it was! Both for gin as a whole and also for my more personal gin pursuits. It has, on the whole, been an outstanding year for the industry with sales reaching an all-time high and gin being declared the most popular spirit in the UK. But, with the highs of sales in excess of 47m bottles of gin, came the inevitable lows as people looked to sell out and cash in. The wonderful gin community rallied though and, desperate to protect our sacred spirit, the #StopFuckingWithGin hashtag was born! While The Pool asked if the gin joke had gone too far, and Gin Monkey – rightly – reminded us to use the hashtag with due respect, there were plenty of offenders who deserved little sympathy – such as gin and tonic tea bags, crisps and, quite possibly the worst of them all, G&T fun buns!

Naturally there were lots of dubious gins released too, from ones featuring marshmallows to others claiming they could make you look younger. But let us not dwell on those. In 2017, I have been to more gin launches, festivals and awards than I could have imagined (and more than is probably advisable!) and I have come across an exceptional number of excellent gins. So let’s give them the attention they deserve. Here, without further ado, and in no particular order, are my top ten gins of 2017 (by which I mean the gins I first encountered and devoured in 2017 – not necessarily gins which were released in 2017)! 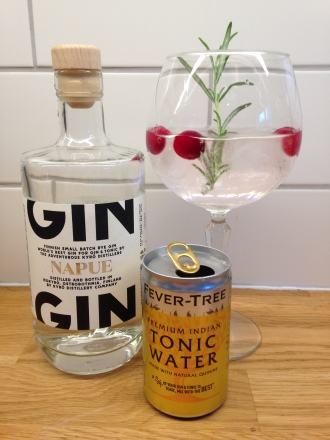 There was never any doubt in my mind that Napue (pronounced Na-pu-eh) Gin would make my top 10 in 2017. Declared “The World’s Best Gin for Gin and Tonic” in 2015, it’s hard not to have high expectations for this gin but it more than exceeded mine. A Finnish gin, Napue is made with 100% whole-grain rye, combined with 12 fairly traditional botanicals and 4 local wild botanicals; meadowsweet, sea buckthorn, cranberries and birch leaves. Neat, the juniper is very prominent alongside coriander and cardamom and there is also a peppery warmth. With water, some of the more subtle flavours come to the fore, particularly the delicious, jammy cranberries. But of course, it’s in a G&T that this gin really shines; dry, full-bodied and complex. The cardamom and rosemary really stand out, but it also has a fruity and subtle sweetness. Utterly delicious. 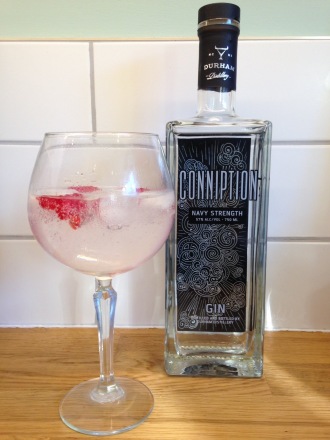 I first came across Conniption Gin at Junipalooza last year and, though their American Dry Gin is very good, it was the Navy Strength I had to take home with me. This modern gin features coriander, caraway, rosemary, cardamom, citrus and fig and is produced using a dual distillation method whereby the citrus and fig are individually vacuum-distilled at room temperature – and thereby retain brighter, fresher, flavours – before being blended back into the gin base produced in a traditional copper still. The result is a punchy yet remarkably smooth, and simply sensational, spirit! Not currently available in the UK, Conniption Gin will soon be stocked on Amazon.co.uk.

Serve with Indian tonic water and cut figs or raspberries. 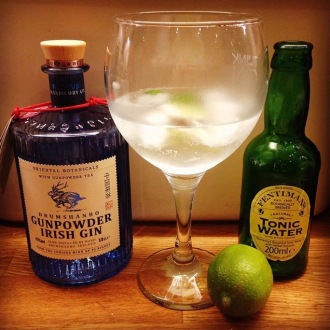 I wanted to love this gin before I even tasted it; I mean, just look at that bottle – it’s a beauty! Thankfully when I did taste it – at the London Irish G&T Festival – it did not disappoint. Drumshanbo Gin is produced by adding 8 botanicals, including cardamom, caraway seeds and star anise, to the copper pot still and a further 4 – Chinese gunpowder (green) tea, Chinese lemon, oriental grapefruit and kaffir lime – to the vapour basket. A unique, punchy and ultimately well-balanced gin, this is well worth seeking out.

Serve with Indian tonic water and red grapefruit or lime. 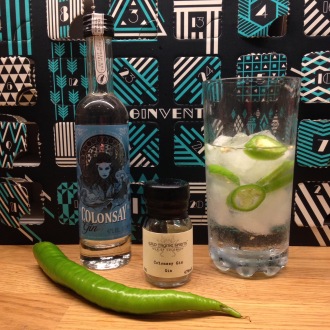 One of the newer gins in my list, Finlay and Eileen Geekie, the founders of Colonsay Gin, attended Junipalooza 2016 as members of the public but by 2017 found themselves behind their very own stand! A classic, juniper-forward gin, the botanicals for Colonsay include angelica root, calamus root, coriander, liquorice, orange peel and orris root. To taste, this is a fresh, clean gin with plenty of piney juniper and a little ginger heat alongside some spicy undertones. A chilli garnish doesn’t work in many G&T’s but here it really brightens and lifts all those lovely green flavours and aromas. Far from masking the botanicals, it actually accentuates them and also adds a little extra heat and spice. It’s an absolute winner for me! 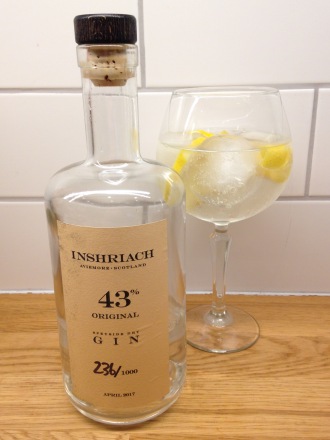 Produced in an award-winning shed, and with all the botanicals foraged within just a few miles of the Scottish estate, there is something truly special about Inshriach Gin. Featuring only juniper, rose hips and juniper tips blended with spring water from the estate, the nose is exceptionally clean and dominated by juniper and lemon. The citrus is less bold when sipped neat but there is certainly plenty of green, piney juniper with some herbal notes and a very peppery bite. As a G&T with a wedge of lemon, this makes an outstandingly classic and clean serve. With bold flavours and no messing about, this is a combination that is guaranteed to hit the spot, especially for the purists among you.

Serve with Indian tonic water and a wedge of lemon.

What could be more Cornish than clotted cream? But clotted cream gin, that sounds mighty bonkers! However, don’t let that put you off: this is an outstanding gin. The four founders had always wanted to include clotted cream in their recipe, and discovered that cold-distilling the neutral spirit and clotted cream in a glass vacuum was a means of maintaining both the flavour and mouthfeel they desired. They then blended the cream spirit with their gin, produced on a modern computer-controlled iStill and including juniper, coriander, chamomile, vanilla, grains of paradise and aniseed among its 12 botanicals. A complex, but balanced gin, this has a subtle sweetness and floral notes alongside spicy pepper. You wouldn’t necessarily recognise the clotted cream in the blend unless you were told to look out for it, but once you know it’s there, you just can’t miss it – not only in flavour but also, if not more so, in mouthfeel. It really deserves to be tried to be believed! And, if you’re a fan of fruit gins, be sure to check out their stunning sloe gin too, with its pleasing sweetness from local honey and warmth from cloves.

Kirkjuvagr (pronounced kirk-u-vaar) is something of a labour of love and an ode to the Orkney Isles. The botanicals – which include ramanas rose (beach rose), burnet rose, bere barley, aronia, borage flower, angelica root and the citrus calamondin – are largely locally harvested but also offer a fantastic storytelling opportunity and, as the founders see it, a connection to their 1000-year-old Viking heritage. The upshot is a gin that is all about provenance and pride, and the result is a slightly salty and bitter, brilliantly rugged gin that certainly brings the outcrops of the Orkneys to mind.

Serve with Indian tonic water and orange peel (ideally in the skulls of your enemies!). 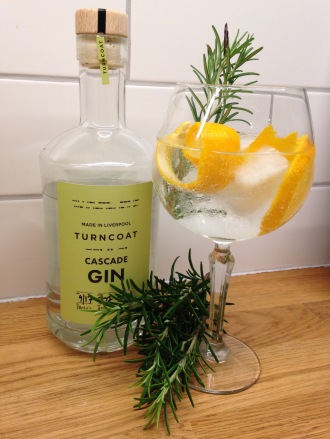 Turncoat Gin – so-called due to its founder’s shifting allegiances from brewing to distilling – is cleverly conceived and brilliantly branded. Its seemingly simple label features redacted text and secret morse code messages. Cleverer still is the use of cascade hops – the variety that is said to have launched the craft beer revolution – as a central botanical. Alongside whole lemons, cardamom, several different orange peels, lemongrass and star anise, Cascade Gin is a herbaceous, hoppy and undoubtedly contemporary gin. There isn’t a huge amount of juniper coming to the fore in this gin but if you’re looking for a G&T that is citrusy, bitter and balanced, this absolutely ticks all the boxes.

Ki No Bi Gin is the flagship spirit from Kyoto; Japan’s first gin distillery. The botanicals, which include yuzu, sanshō pepper, ginger and bamboo leaves, are separated into six categories (base, citrus, herbal, spice, floral and tea), each of which is macerated in rice spirit before being distilled individually and then blended back together. A citrusy gin with a viscous mouthfeel, it is dry, distinctive and delicious.

Serve with Indian tonic water and yuzu or lime and lemon peel. 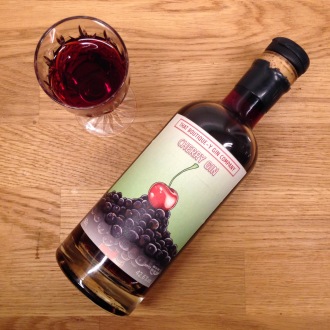 This gin is arguably less bonkers than many of That Boutique-y Gin Company’s offerings but at 42.6% ABV, and as smooth and sippable as a silk stocking, it certainly is dangerous! Made with sweet and sour marasca cherries and a pinch of spice, this is an exquisite take on a more traditional sloe gin. And if fruit gins are your thing, make sure you check out their new Rhubarb Triangle Gin too.

Serve neat, or with cola and lime, or hibiscus tonic water and rosemary.