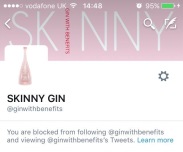 2016 has earned itself a pretty damning reputation and, largely, with good reason. But, politics and celebrity deaths aside, it hasn’t been all bad. And for gin it’s been pretty bloody good! Approximately 50 new distilleries opened last year, contributing to a total production of 528 million litres of gin and resulting in sales of over £1billion for the first time. The rise and rise of small-batch craft gin was the theme of the year, but the big story came right at the end, when the founders of the craft gin renaissance, Sipsmith, were sold to Beam Suntory, the world’s third-largest spirits company (and owner of Jim Beam, Maker’s Mark, Teacher’s and Courvoisier), for a reported £50million. Other significant deals included the sale of Spencerfield Spirit Company, producers of Edinburgh Gin, to Ian Macleod Distillers, and Liverpool Gin to Halewood International, the makers of Lambrini.

There were, honestly, too many new gins to mention in 2016. However, some of the more notable ones (in my opinion at least) include Pothecary Gin and Old Bakery Gin, both of which have wonderful back-stories. And, of course, Scotland has also been producing gin by the barrel-load, including the new Esker, McQueen and Avva Gins. Limited edition gins, such as Rock Rose Gin‘s seasonal editions, have also proved incredibly popular. Alongside this we have, of course, seen the incredible growth of the gin subscription service, including Gin Explorer, I Love Gin, Little Gin Box and The Juniper Club. However, on the flip-side, Microbarbox have already withdrawn their Gin Club as they were unable to get the price down far enough to compete with Craft Gin Club‘s full-sized bottles. 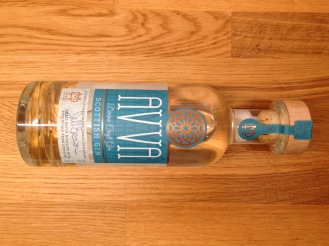 However, my ginuine highlights are more about the stories of (late) 2016. In a year of celebrity deaths and fake news, my absolute favourite story has to be that of wonderful 100-year-old Mabel Jackson and her astonishing gin habit. Sadly Mabel’s favourite tipple was also the cause of her demise. And that’s just where the story starts…

Mabel got a lot of people talking, from The Drinks Business to Cosmopolitan, but there was one story that eclipsed even her. Remember Skinny Gin?! For one week in December, no-one who was anyone in the gin world hadn’t heard of @ginwithbenefits. And probably been blocked by them on Twitter too! It all started with a pink bottle promising a lower-calorie gin with “benefits”, but without guilt. Oh, and it was supposed to be 35% ABV. Which meant it couldn’t be a gin. Except it was; that was a typo, they said. It would actually be 40% ABV. But then the new images came out stating it was 37.5% ABV. So that cleared things up. But why was it “lower-calorie”? Lower-calorie than what? And what exactly were the benefits? Well, there were none actually, so they swiftly changed their Twitter handle to @ginwithlove. There wasn’t much love either as they went around insulting and blocking every gin-lover on Twitter who dared to engage with them, and those who didn’t too. After a week including threats of legal action and some brilliant spoofs, they spontaneously combusted and deleted their profile from Twitter! 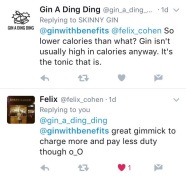 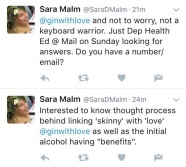 One week it was all about Skinny Gin; the next it was all about The Distillery. Portobello Road Gin’s much anticipated “gin hotel” and “super-distillery” opened in central London in December 2016. There was a lot of hype to live up to but, my God, they lived up to it with one amazing distillery, two stunning bars, three gorgeous bedrooms and hundreds of incredible cocktails! 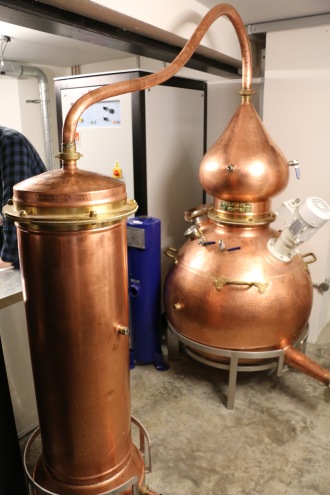 And, for anyone who was still doubting the popularity of gin in 2016 (surely no-one), there was #baublemania. Pickering’s Gin came up with the ingenious idea of filling empty multi-coloured baubles with gin to bedeck our Christmas trees and everyone loved it. And I mean everyone! Their first batch sold out in two days. Following a huge amount of press, 31Dover‘s stock sold out in just one hour. But then Pickering’s second, and last, batch sold out in just 82 seconds, after 15,000 people crashed their site for most of the day!  Of course there were complaints and criticisms but poor old Pickering’s are only a small operation. And if you didn’t get your baubles this year, fear not: Pickering’s Gin have promised that all their gin friends will get their gin baubles next year. 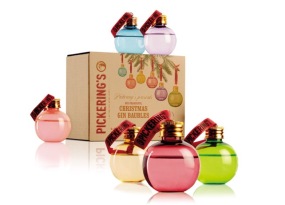 So, baubles aside, what else does 2017 have in store for the gin world? Definitely more gin! And, if the experts are to be believed, we can expect more fruit gins, and more seasonal and limited-edition gins (my tip here would be to keep a close eye on Poetic License who have all sorts of exciting things up their sleeves). We’ll also be seeing the continued rise (and perhaps fall) of the gin subscription service with Gin Gin and One Time Gin launching either side of Christmas 2016. And, finally, Olivier Ward of Gin Foundry predicts the rise of the hobby distiller; and considering what I received for Christmas, who am I to argue with that?!