There’s always a must-have toy at Christmas that everyone is desperate to get their mitts on. This year, however, that item is a toy for adults, not children, and comes in the shape of a simple Christmas bauble. A bauble … filled with gin!

Pickering’s launched the original gin baubles and caused something little short of hysteria as their baubles made headlines in, amongst others, Time Out, Metro, The Huffington Post, Mashable and Stylist Magazine. Everyone loved them and wanted to know where to get them!

The multi-coloured baubles are each filled with 50ml of Pickering’s Gin and are decorated with a Pickering’s ribbon ready to decorate your table or hang from your tree (£30 for 6). Pickering’s first batch sold out in two days and, shortly afterwards, 31Dover sold out of their stock in just one hour! 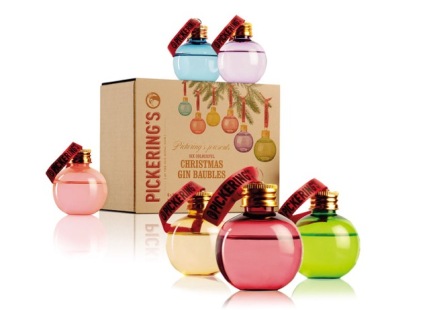 So, how do you get them this Christmas? If it’s the Pickering’s baubles you have your heart set on, join their #ginfriends mailing list, and keep an eye on their Twitter account, to be first in the know when they release their final batch in early December. Pickering’s have also said they will have some at the Foodies Festival at The Old Truman Brewery, London 18-20 November (and perhaps, one would assume, also at Edinburgh EICC 25-29 November). 31Dover are also planning a second release in early December and Harvey Nichols apparently have stock which hasn’t yet gone on sale.

If you’re not so fussed about Pickering’s Gin, Little Gin Box have just released their own baubles filled with 50ml of their recently featured artisan gins (also £30 for 6). Essentially the same concept as the Pickering’s baubles, these don’t appear to have ribbons attached but contain a selection of fine gins including Trevethan Gin, Porter’s Gin, Psychopomp Woden Gin and Tiger Gin.

And then there is the third way for the more creative/less wealthy/non-gin drinkers among you! You can make your own gin (or rum, or whisky, or wine) baubles! Yes, you can purchase the empty baubles and fill them with whatever you, or your loved ones, love best. Unfilled baubles can (currently) be purchased from iwantoneofthose for £9.99 for one box of six baubles (or 3 boxes for £20 or 6 boxes for £35) or Amazon for £9.95. If it was me I’d then pick a really good, but not really expensive, gin, such as East London Liquor Company‘s London Dry Gin (a bargain at about £20 for 70cl), fill up the 6 baubles with 30cl of gin and enjoy the other 40cl left in the bottle myself!

Just remember to keep those baubles away from children, pets, and anything highly flammable, like a dead tree…!

6 thoughts on “How To Bag Your Gin Baubles This Christmas”