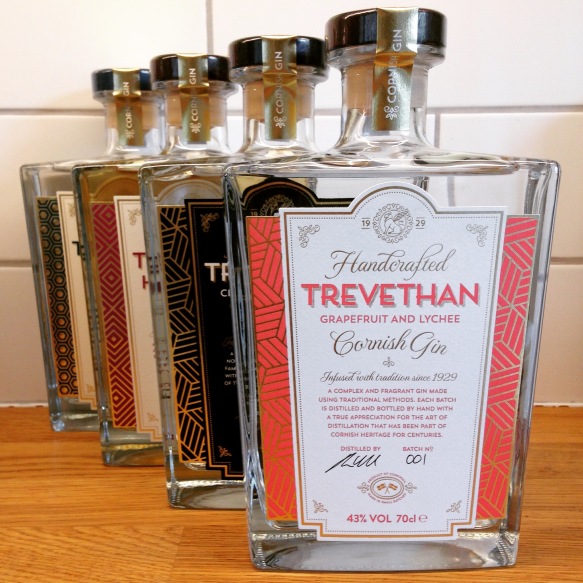 I’ve been a firm fan of Trevethan Gin ever since I first tasted it courtesy of Little Gin Box, when it sailed straight into my top ten of 2016. Not long after, in my rave review of early 2017, I admired their modest ambition – that anyone opening a bottle should “remember the reason it was created by Norman Trevethan in the first place (was) to be shared” – and tipped them for greatness. They may not have gone for world domination (yet) but boy have they been busy – adding not one, not two, but three more gins to their range – and I’ve been lucky enough to get my mitts on every one.

Norman Trevethan was co-founder Rob Cuffe’s grandfather; Cornish born and bred, it was Norman’s exposure to high-society London during the Roaring Twenties – when he was chauffeur to Earl and Lady St Germans – that inspired him to perfect the family’s gin recipe. And 70 years later it was Rob and John Hall’s mission to resurrect the recipe from little more than Rob’s mum’s memory and the Cornish hedgerows. 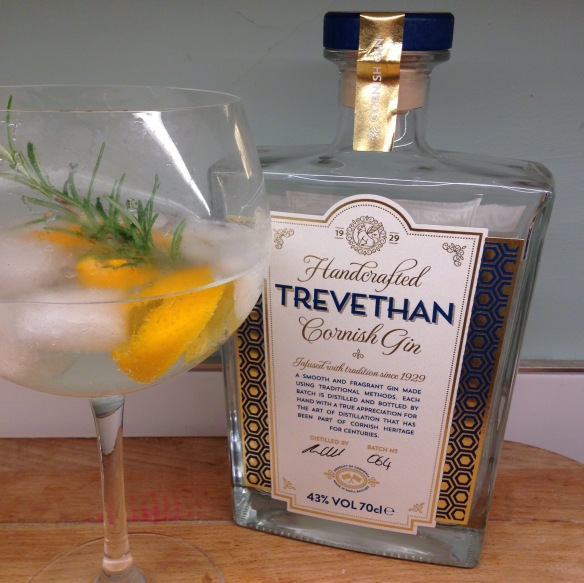 After two years of experimentation, hard work and perseverance, the Trevethan family gin was re-born in October 2015. Another two years later, Rob and John decided to honour and commemorate Norman by creating a navy strength Chauffeur’s Reserve Gin featuring the same botanicals as their inaugural release – including coriander, cassia bark, angelica, cardamom, orange peel, lemon peel, vanilla, Cornish elderflower and gorse flower – but in higher quantities due to the increased 57% ABV.

On the nose, Chauffeur’s Reserve is surprisingly delicate and complex and not nearly as boozy as you might expect. Initially there’s some sweetness and a slight earthiness in the background, but, as the gin opens up, those aromas reveal themselves as sweet orange and dry, dusty cinnamon. Tasted neat, there’s no doubt this is a navy strength gin; it really packs a punch! A few drops of water help to knock back the booze and open up this complex and well-balanced gin. There’s juniper there, and citrus too – particularly in the oily mouthfeel – but it’s cinnamon-like cassia that is the star of the show, lending the gin a touch of sweetness but creating a predominantly dry and spicy profile. Served with Indian tonic water, a twist of grapefruit peel and a sprig of oregano this makes a seriously good, full-bodied and satisfying gin and tonic! 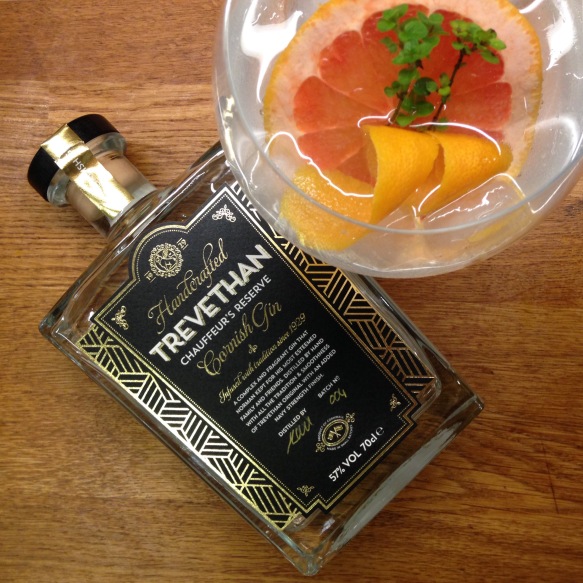 I love a spicy spirit (and could drink that one all evening!) but if that’s not your cup of tea, you’ll want to check out Trevethan’s newest release; Grapefruit and Lychee Gin. Originally created for Drink Finder, this gin is made using a London Dry base, featuring meadow sweet, with the addition of essence of grapefruit and lychee also made by Trevethan. Juniper dominates the nose alongside a little citrus but the flavour is much more subtle. Grapefruit isn’t particularly prominent but I think it must be the lychee that gives the gin its perfumed and fragrant quality. Soft and mellow, served with Mediterranean tonic, grapefruit and mint, this makes a light, refreshing gin and tonic that will really come into its own in the height of summer. 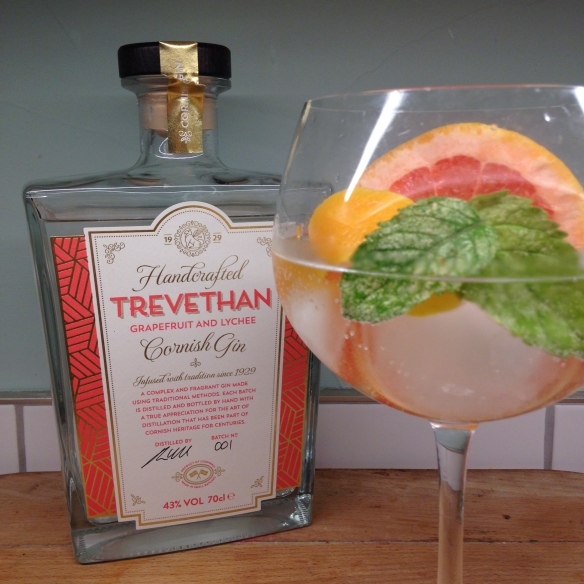 And then there’s Honey Oak Gin; a truly unique creation. Not being a great fan of cask-aged gins I was a little wary of trying this but I needn’t have been, not least because, despite what the name may suggest, this isn’t a cask-aged gin at all! Instead, green oak blocks from the heart of a fallen tree are toasted and immersed in Cornish honey to allow the wood to draw in the honey flavour. The oak is later removed and left to steep in Trevethan Cornish Gin for six weeks to release the honey, oak tannin and natural sugars from the wood. The result is an amber-coloured liquid with the aroma of juniper, as well as a little spice and a delicate sweetness. It may look like a cask-aged gin but it doesn’t taste like one. With plenty of juniper alongside honeyed notes, Honey Oak is a warming and rounded gin and makes an enjoyable G&T with Mediterranean tonic and an apple and juniper garnish. I also found that adding a few slices of fresh ginger helped give the G&T some extra body. Alternatively, I think a ginger ale mixer could be interesting and I’m told Fever-Tree’s limited-edition Clementine and Cinnamon tonic goes particularly well too. 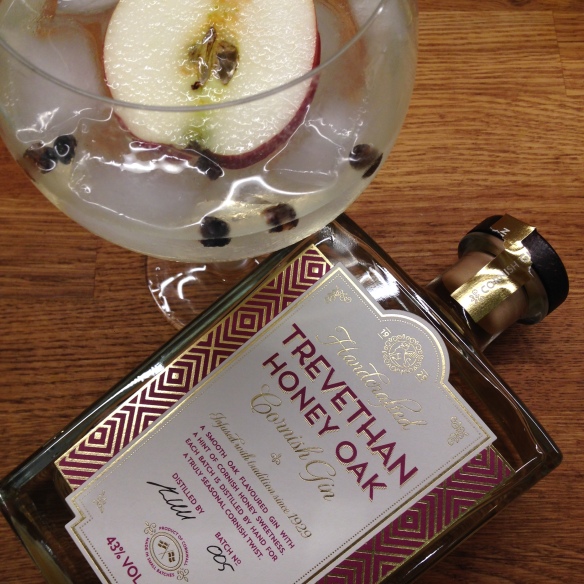 Indeed, there’s so much to this gin I felt it was worth further experimentation and, with the nights drawing in, I couldn’t resist brewing up a hot mulled gin. With apple juice, star anise, cloves and ginger this was like a great, big, comforting cuddle on a cold night! 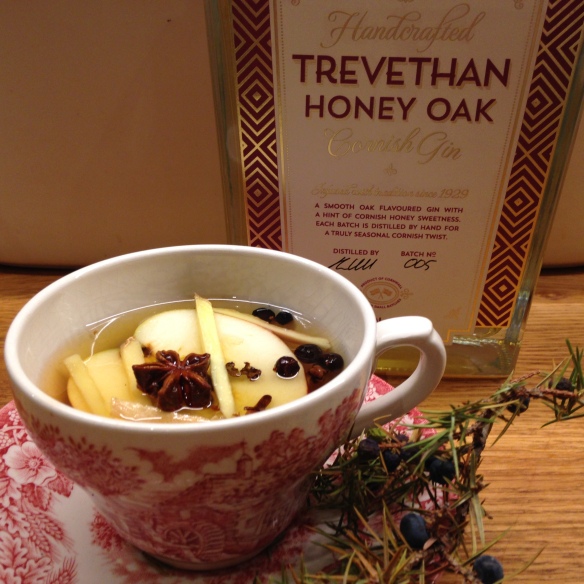 Since that first sip of Trevethan Cornish Gin two years ago, I’ve had high expectations of this distillery and I’m delighted to report they haven’t disappointed. While I’m probably going to save the Grapefruit and Lychee for warmer months, I’ve no doubt the Chauffeur’s Reserve is going to be a firm favourite for gin and tonics during the winter and as for the Honey Oak; it’s a fascinating creation and definitely the one I’ll be playing around with the most…

Purchase the entire range direct from the Trevethan Distillery shop (from £38 for 70cl).

With thanks to Marc Megilley, Head of UK Sales at Trevethan Distillery, for the complimentary bottles of gin.