I love craft gin. It goes without saying that I love drinking it but I also love hearing the stories behind it. The tales about why people embarked on small batch distilling and how they selected their botanicals. Many craft gins are born of love of the spirit, such as Esker Gin and Rock Rose Gin, or, less often, of each other, such as with Manchester Gin! Some, like Pothecary and Sipsmith, are tales of perseverance and determination. Lots of new gins look to the future, searching out increasingly unusual botanicals, in their efforts to be modern and unique but far fewer look to the past. One of those is Half Hitch inspired by the lost gin history of Camden and now another to add to that list is Old Bakery Gin.

Ian Puddick of Old Bakery Gin is equally passionate about craft gin, critical of the way in which some big brands are jumping on the artisan band wagon but also unhappy about those smaller distillers making unsubstantiated claims to use hand foraged botanicals and, as he sees it, prioritising marketing ahead of heritage quality and taste. However, the way in which Ian found gin was more a result of serendipity than love.

In 2013 Ian’s rented offices in Whetstone were due to be demolished so he purchased four brick-built Victorian workshops in Pymmes Mews in Palmers Green, North London. Ian was fortunate to meet a local resident, 96-year-old Lou, who was born in the house opposite the workshops and shared the history of Pymmes Mews with Ian before he sadly passed away in January. Ian discovered that unit 1 was originally the old stables, housing the horse and cart for the bakery which operated in units 2 and 3. Unit 4 was then used as the grain store for the bakery.

However, it wasn’t until 2014, when Ian found himself in a land dispute regarding the chimney and oven which are joined to the rear of unit 3, that Ian discovered that, approximately 120 years ago, the bakery used to make and sell illicit gin! Ian then tracked down the family descendants, who now live in Norfolk and Lincoln, who gave him the gin “recipe” which is said to date from 1758. Being an illicit gin, Ian was told that the botanicals were limited to juniper, lime and lemon peel and liquorice root in a grain alcohol based on wheat and corn. Alongside his father, and Master Distiller, Ron, Ian begin experimenting with the “recipe” and began a process of trial and error to make it drinkable, and then marketable.

The history of Pymmes Mews has inspired the design of the Old Bakery Gin bottle too. The substantial 50cl bottle is sealed with yellow wax which complements the vintage style label which was inspired by a ghost sign for “Miss M’s Bakery Est. 1890” on the building’s wall, which they have also restored. The bottle also features a dapper image of Master Distiller Ron in his hey-day. 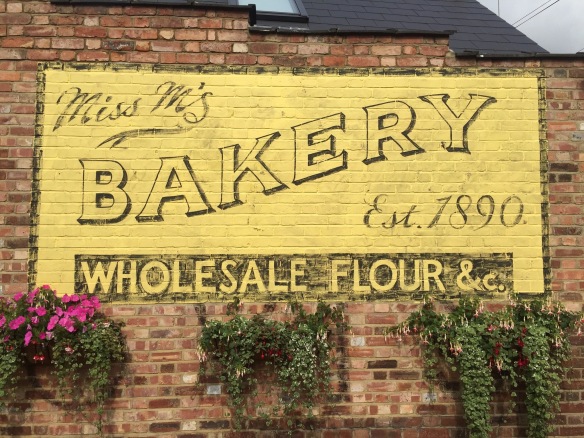 On the nose Old Bakery Gin packs a juniper punch. The taste is also very much dominated by juniper and citrus. Indeed, there are few other botanicals to complicate the flavours. This isn’t a particularly distinctive gin but what it is is both smooth and clean. The recommended serve is with ice and tonic and a garnish of raspberry and mint leaves or cucumber. As a relatively uncomplicated gin the garnishes (and tonic) really impart a lot of character and this gin could probably carry a host of flavours, perhaps making it good for cocktails. One suggested combination is to serve a generous measure of Old Bakery Gin with a vanilla pod (warmed by hand) and ice and soda water. 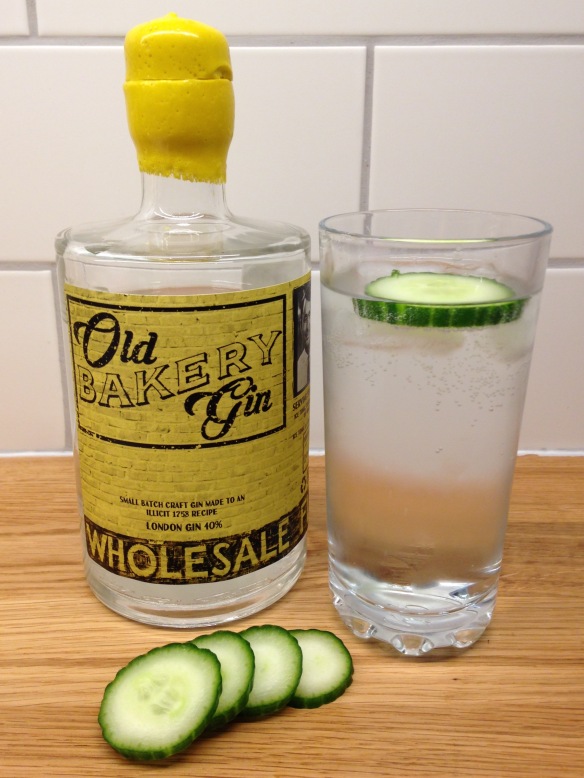