There’s nothing quite like a G&T at the end of a long day, but do you have a favourite place to enjoy yours? For me, it’s in my hammock in the back of my little London garden. But for travel-loving couple Ben and Kate Marston, it’s all about being in the great outdoors, ideally under the stars and beside a glowing campfire. It was this shared love of outdoor pursuits, adventure and gin, alongside experience in tourism and design, that inspired Ben and Kate to create their perfect Campfire Gin and, in so doing, establish Hertfordshire’s first distillery in 2014.

Following a successful Crowdfunding campaign in late 2015 which raised over £20,000, Puddingstone Distillery – named after a rare local rock formation – opened on 11 November 2016. Initially Campfire Gin was made in a relatively small 50-litre still before production shifted over to a larger 200-litre still in January 2017. In keeping with Ben and Kate’s ambitious spirit, the stills were named after Isabella Lucy Bird – a nineteenth-century philanthropist, writer, traveller and photographer – and Amelia Earhart – the first woman to fly solo across the Atlantic Ocean.

The Marstons, too, are not ones to shy away from a challenge and insist on carrying out every part of the production process themselves, from selecting and preparing botanicals, distilling and resting (both the gin and themselves!), to bottling and labelling. Even the Distillery’s logo and branding, which embellish their handsome bottles, were the work of graphic designer Kate. But the pair were keen to consider more than just aesthetic appeal: environmental impact was also taken into account, and the squat bottle they selected uses half the glass of a standard bottle, thereby reducing the amount of energy required for production, shipping and even recycling. 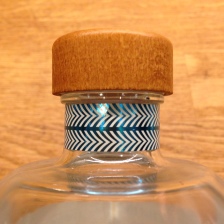 This exquisite attention to detail, thankfully, extends to the contents of the bottles too. The original London Dry Campfire Gin features ten botanicals from the more common juniper, orris, coriander and citrus peel to the less familiar physalis (also known as golden berry), roasted hazelnut and rooibos (a South African bush, the leaves of which are commonly used to make herbal tea and which are said to have a nutty flavour), all of which are macerated in UK-produced neutral wheat spirit prior to distillation.

On the nose, the dominant aromas are fairly classic juniper and orange. The palate is similar; however the juniper is less forward and there’s more spicy coriander alongside the sweet citrus followed by a pepperiness on the long finish. I’m not all that familiar with the taste of rooibos but there’s something within that provides a depth of flavour – it could be the rooibos or, indeed, the roasted hazelnut. Puddingstone promote this as a spirit that is “pitching camp on the boundary between classic and contemporary gins” and that sounds just about right to me. I’m pretty keen on contemporary gins, thankfully, and I must say this makes a cracking G&T! There’s not a whole lot of juniper to taste, but it is there and it definitely lends a pleasing bite against the sweeter citrus. Smooth, balanced and bloody delicious, this is definitely my kind of drink!

Campfire’s newer Navy Strength Gin features the same unusual botanicals as their London Dry but these are subject to different pre-distillation treatments and proportions, to balance the bold flavours against the increased ABV. And having been awarded Navy Gin of the Year at the Craft Distilling Expo 2017, expectations are high!

As one would expect, the nose on this is boozy! The citrus also appears to be pushed back to allow a greater emphasis on the juniper profile. To taste, this navy strength really packs a punch! There’s juniper, a delicate (short-lived!) sweetness and plenty of heat and tons of pepper before the citrus comes through on the finish. It’s big and it’s bold and it’s got bite. But it’s also got breadth and balance – and it’s very, very good. I’ve yet to try it with the recommended Fever-Tree Mediterranean Tonic but it makes a great G&T with Indian or Aromatic Tonic Water. It’s not a subtle G&T but who wants a Navy Strength to be subtle?!

The Navy Strength recipe also forms the basis of Campfire’s Cask Aged Gin. The spirit is first reduced to cask strength, before being rested in American Oak, ex-bourbon casks for just 22 days. The casks add flavour, aroma and colour to the spirits stored within but, to be completely honest, I’m yet to find a cask-aged gin I really like. But that is largely because I’m get to find a cask-aged gin that tastes of gin. All too often the flavour from the cask dominates the juniper and the resulting liquor tastes, to me at least, too much like a brown spirit.

With a gentle, pale golden hue and a surprisingly conventional aroma, Campfire’s Cask Aged Gin promises to be something altogether different. And indeed I’m delighted to find juniper on the nose alongside faint vanilla notes and something richer, almost chocolatey. Better still, there’s juniper up front on the palate too! The cask does impart some subtle oaky bourbon notes, and there’s certainly a whiskey heat on the finish too, but this is still, at its heart, a gin. And not just any gin, but the gin that may just have converted me to cask-aged gins!

A well-balanced spirit, Puddingstone recommend serving their Cask Aged Gin neat over ice and its certainly smooth enough to do so. Personally, I can well imagine happily sipping this from a hip flask on a cool summer evening beside a warm, roaring campfire (or chiminea in my urban plot!). However, Puddingstone also suggest pairing it with Fever-Tree’s Aromatic Tonic, which creates an intriguing drink reminiscent of a gentle, boozy ginger ale. Other options include Madagascan Cola or serving it in a Negroni. How ever you fancy trying it, though, do make sure you try it; it’s a Cask Aged Gin like no other I’ve tasted!

In truth, the Campfire Gin range doesn’t especially bring to mind the spirit of the outdoors to me (as nice as it is to enjoy in my hammock!). And nor are the gins as unusual as I might expect, given some of the unexpected botanicals. However, they are exceptional, and exceptionally good, gins! My pick of the bunch is the citrussy London Dry, but the Navy Strength is fantastic too and frankly I never expected to find a Cask Aged Gin I liked, so I’d call that a hat-trick! And with Puddingstone planning to produce two seasonal variations – to highlight their region’s crops – and also working on some exciting collaborations, they are a distillery well worth getting to know and keeping an eye on!

Meet the maker and sample the spirits at Junipalooza 2018.

Purchase the Campfire Gin range direct from Puddingstone Distillery at between £33 and £38 for 50cl.

With thanks to Ben Marston for the complimentary samples.